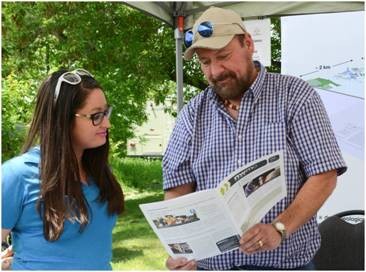 UNBI and NWMO has renewed relationship for 2019 by signing new relationship agreement for February 2019 to December 2019.

Article: Communities Come Together to Learn July 2019 Oakville, ON

NWMO Council of Elders and Youth

-To provide advice to the NWMO that will help protect and preserve all creation: air, land, fire, water, plants, medicines, animals and humankind

There has been no Maliseet Elder representation on the council since Elder Leslie Perley’s term expired in August 2016. Since any spent fuel that will be transported from Point LePreau Nuclear Generating Station will be transported through Maliseet territory, UNBI is expressing concern to the  NWMO that this position is not being supported.

The Nuclear Waste Management Organization (NWMO) was established in 2002 by Canada's nuclear electricity producers in accordance with the Nuclear Fuel Waste Act (NFWA). Operating on a not-for-profit basis under the Canada Not-for-profit Corporations Act, the NWMO is responsible for designing and implementing Canada's plan for the long-term management of used nuclear fuel. Used nuclear fuel is created by generating electricity in nuclear power plants.

Ontario Power Generation (OPG), New Brunswick Power Corporation, and Hydro-Québec (HQ) are the founding Members of the NWMO, and along with Atomic Energy of Canada Limited (AECL), are required to fund the NWMO's Operations.

The NFWA required the NWMO to study approaches for the long-term management of used nuclear fuel and recommend to the Government of Canada a preferred approach. The NWMO initiated this study in 2002, and in 2005, after a three-year dialogue with Canadians from coast to Coast, submitted to the Minister of Natural Resources a proposed approach for the long-term management of Canada's used nuclear fuel.

In June 2007, the Government of Canada selected Adaptive Phased Management (APM) as Canada's plan for the long-term management of USed nuclear fuel.

The technical end point of APM is the centralized containment and isolation of the used fuel in a deep geological repository located at a safe site with an informed and willing host. The plan also involves the development of a used fuel transportation system to transport used nuclear fuel to the repository site.